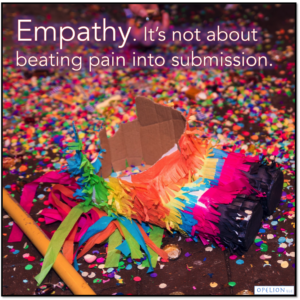 When we see suffering in someone, our first response is either to run away or to tackle it with the all vigor of kids against a piñata. We want life to be sweet, so we try to beat the pain into submission so that everything can come up candy again. The problem is, even though we mean well, we’re beating the heck out of them so that we can get to the candy, not so that they can.

I recently took my 6-year-old daughter to a birthday party. One of her best friends is a force of nature and his little brother follows suit, and about an hour into the party, their mother had enough and decided it was time to go. As she was trying to forcibly remove them, the little one went into limp mode, while the older one was twisting and writhing trying to break away from her. I could see the mom was close to tears, and when she lost her grip on the older one, she broke down. “I hate my kids – I love them – but I hate the way they behave!”

It’s so hard with one, and I have often been inspired by how well she manages both of them. They are imaginative, creative, sweet boys, and their sometimes disruptive behavior is in many ways indicative of the level of safety they feel because of her strength as a mother. But it’s hard to feel strong in the midst of a meltdown – in public.

This is a place every parent has been (and if you’re thinking you haven’t been, you either have an highly unusual child, or you may need to examine the level to which you are able to be honest with yourself).

These are the moments when empathy matters.

Do we show up bravely for someone by walking through their pain with them and seeking to understand what they most need in that moment, or do we seek to distance ourselves by diminishing them through criticizing or trying to fix it for them.

One of the other moms went to tame the boys, and two of us moved toward the mother in crisis. To be honest, I hesitated at first. I don’t know the mom all that well and didn’t want to intrude, but I realized that as a bystander, I could become part of her shame story about being alone in this, so I moved into the conversation.

Whacking away at the piñata

The other woman first tried the “it’s not that bad…happens to everyone,” move, to which the mom replied, “No, it really is that bad. My children are horrible.” She then tried to provide fix-it solutions – negotiating, taking away privileges, etc, all of which the mom had tried. She then tried the, “They’ll grow out of it,” tactic, to which the mom replied, “We’ve been hoping that for years, and it isn’t happening.” Tactic four was, “I have this friend who has a daughter who…,” and when that one didn’t work, she launched into an even longer story about another friend.

It was a full frontal assault, and I couldn’t get a word in edgewise. She could see it wasn’t working, but rather than backing off, she increased the speed and intensity of her volleys – whacking away at the piñata – frantically trying to find some way to help until the mom bravely said (and I so loved and admired her for this), “I know you’re trying to help, and I appreciate that, but we have tried literally everything at this point. I don’t need more solutions.” The full frontal assault worked well for the birthday piñata, but it only served to remind the mother of all the things that haven’t worked and that these things somehow work for other people but not for her.

For me, it was a moment of gratitude that I do the work I do and have actively practiced empathy because I have used every single one of those tactics – and others – in the past, and if this had happened even 18 months earlier, my response would have been very different. So I am not being critical of the other woman in this story. She had the courage to wade into the fray and be there, which is more than we often have the courage to do in these tough situations.

But where do I start?

I know from my own experience that when parenting gets that hard, we sink into a really dark, depressing place, and the last thing we think to do – but the thing we need above all else – is to take care of ourselves. So, when I was finally able to speak, my first question was, “What do you do to take care of you?”

And when the other woman walked away, I said, “I know how hard it is with one, so it must be so hard when they’re both being uncooperative.” This gave her an opening to talk about how tough things have been. And then I told her that my daughter has only recently stopped hitting me, and her eyes widened, and she said, “Really?!” And I said, “Yes, so I get it. They can be so awesome one minute and then the next minute they’re melting down and flailing and getting physical and it’s like how the hell do I control this?!”

So how is this approach any different?

So how is this different than the other woman telling the story about a friend’s daughter?   The mom knows my daughter and sees her as a perfectly ordinary, bright, fun child; so hearing that this ordinary child also melts down and acts out physically is more meaningful than a story about someone she’s never seen. And more importantly, it helps combat her shame around feeling like she’s a bad mom who can’t control her kids and that she’s all alone in this. As Brené Brown says, “If you douse shame with empathy, it can’t survive.”

If you douse shame with empathy, it can’t survive.

Empathy is a balance of sharing just enough of your own experience to show you understand and that the other person is not alone, but it has to always be about the other person. As soon as you make it about you – about your story, about your ability to fix the problem – your empathy train has gone off the rails.

Ways to keep yourself on track:

Many thanks to Brené Brown for her powerful work on Empathy.

Carol Robert is a coach, instructor and organizational culture change agent. Her workshops, coaching and hands-on organizational interventions have helped hundreds shift their behavior to find success in their work and more courage and joy in their lives.